New Zealand will be up against Bangladesh in the 2nd T20I match of a 5-match series in Shere Bangla National Stadium, Mirpur on 3rd September 2021. Bangladesh has beaten New Zealand in the 1st T20I match and has taken a lead of 1-0. A much better performance is expected out of the visitors in the next match, while Bangladesh would be looking to maintain their strong form  against them.

Pitch is favorable for batting and is best suited for pacers.

1) Mushfiqur Rahim – He has great experience in this format and is an excellent pick from his squad for this category. He is his team’s best hope for a victory in the next match too.

2) Tom Blundell – He’s a brash wicketkeeper-batsman with a wide range of sweeps in his arsenal. He wasn’t in his best shape in the last match but has potential to play good innings in the upcoming matches.

1) Mahmudullah – He is a strong right-handed batsman who can drive the ball imperiously through the covers. He is also an all-rounder who bats in the middle order and bowls clean off spin. His team can bank on shoulders for another victory.

2) Colin de Grandhomme – The right-handed batsman has been playing in great form in the past few matches. He is a wise pick for the upcoming match.

3) Finn Allen – The right-handed batsman is a young talented hard hitting player from his team, who mixes clearing the rope with deft placement and brilliant running between the wickets.

4) Mohammad Naim Sheikh – The left-handed batsman has glamour to his batting. He uses his hand-eye coordination quite well against the quicks. He is a wise choice for the upcoming match.

1) Rubel Hossain – The right arm fast bowler is a talented player who bowls with a sling action and his current form makes him a wise pick for the upcoming match.

2) Ben Sears – The right arm medium fast bowler can give the ball a good rip as he has delivered excellent bowling performances in the past few matches.

3) Blair Tickner – The right-arm medium fast bowler’s pace has proven to be very beneficial for his team in the recent matches. He is playing in good form.

4) Shoriful Islam – The left-arm medium-fast bowler is a left-arm pace sensation and a star player from his squad. He has potential to play excellent innings in the upcoming matches.

1) Mahedi Hasan – The right-handed batsman and right-arm off break bowler has a unique style of bowling that baffles even the most experienced batsman. His exceptional skills and techniques will benefit his team in the upcoming matches.

2) Shakib Al Hasan – The left-handed batsman and slow left-arm orthodox bowler has been consistent with his performance. He has proved valuable for his team on countless occasions.

3) Scott Kuggeleijn – The right-handed batsman and right arm medium bowler is a hard-hitting batsman and dynamic bowler with great wicket-taking skills. He is a must-pick for the upcoming match. 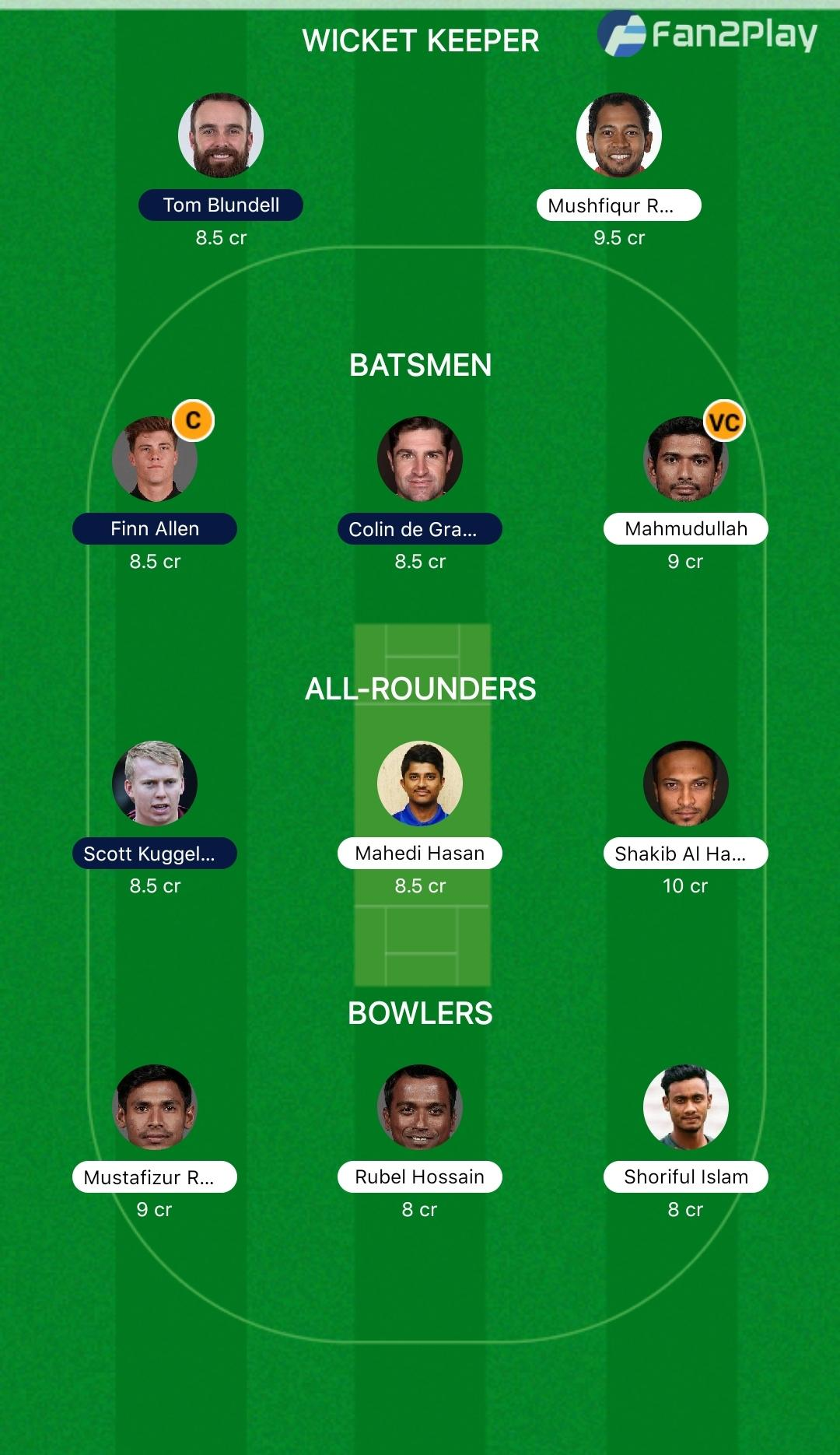