The IPL 2022 season will begin on March 26th. The reigning champions Chennai Super Kings will face Kolkata Knight Riders in the opening match of the 15th season of the IPL, which will be held at the Wankhede Stadium in Mumbai, India. MS Dhoni, Ravindra Jadeja, Robin Uthappa, Dwayne Bravo, Deepak Chahar, and others are among the CSK players in the IPL 2022 team. Players like Andre Russel, Varun Chakravarty, Venkatesh Iyer, Sheldon Jackson, and others will be part of the KKR squad. It will be exciting to see which team starts off their campaign with a win.

The Pitch is balanced and is more favourable to batters and best suited for pacers than spinners. Average runs scored on this venue is 169  and have 60% chances of winning if batting first. Weather will be normal with scattered clouds and average temperature at 31C.

1) Mahendra Singh Dhoni – 4 times IPL winning captain MSD, Right hand wicket keeper batsman, will be playing this season not as a captain but as a wicketkeeper. He is one of the most experienced players not just for his team but for the whole IPL.

2) Sam Billings – He is a Right Hand Batter and wicket keeper who will be playing for KKR in IPL 2022. He has recently scored 41 against WI on Bridgetown ground in a T20 series.

1) Shreyas Iyer- He is a top order batter with a right hand bat style. He showed some marvellous batting in the recent match against Sri Lanka and scored 92 & 67 on Bengaluru ground in test format.

2) Ruturaj Gaikwad – He’s a free-styling opener whose game is built around fluidity with a batting style as Right hand bat. He was the orange cap winner in the last IPL season.

3) Ambati Rayudu – The right handed batsman is a middle order batter with a lot of experience with more than 5000 runs in IPL.

4) Nitish Rana – Nitish Rana, a left-handed batter with a silky touch, has been a key element in Kolkata Knight Riders’ batting plan, particularly at the top of the order.

1) Varun Chakravarthy – Varun has a unique movement that reminds of Ajantha Mendis, and he collaborated with Sunil Narine during the KKR net session in 2017. Varun was one among the most economical bowlers in the 2018 TNPL season, averaging just 4.7 RPO.

2) Tim Southee – Tim Southee, a Right Arm Medium Fast bowler with a wide range of swing in his arsenal, has shown tremendous promise since breaking into New Zealand’s national frame.

3) Adam Milne- He is a right arm fast bowler who has quite impressive stats.

4) Dwayne Bravo –  There are few players in the contemporary period that have received the kind of acclaim that Dwayne Bravo has. Bravo is a right arm fast bowler and he continued to chip in wherever he was required.

1) Ravindra Jadeja – He is a left-handed middle-order batsman who bowls off spin and bats left-handed. In the Indian Premier League, he is the current captain of Chennai Super Kings.

2) Andre Russel – Dre Russ, as he is called among fans, rose to notoriety as a result of his power hitting and all-around dominance. He created a name for himself in the IPL for KKR in 2015, when he was named MVP after hitting 392 runs at a strike rate of 192 and taking 14 wickets.

3) Venkatesh Iyer – He is a left-handed all-rounder with a right-arm medium-fast bowling style who made his international debut for India Cricket Team in November 2021 and will be playing for KKR. 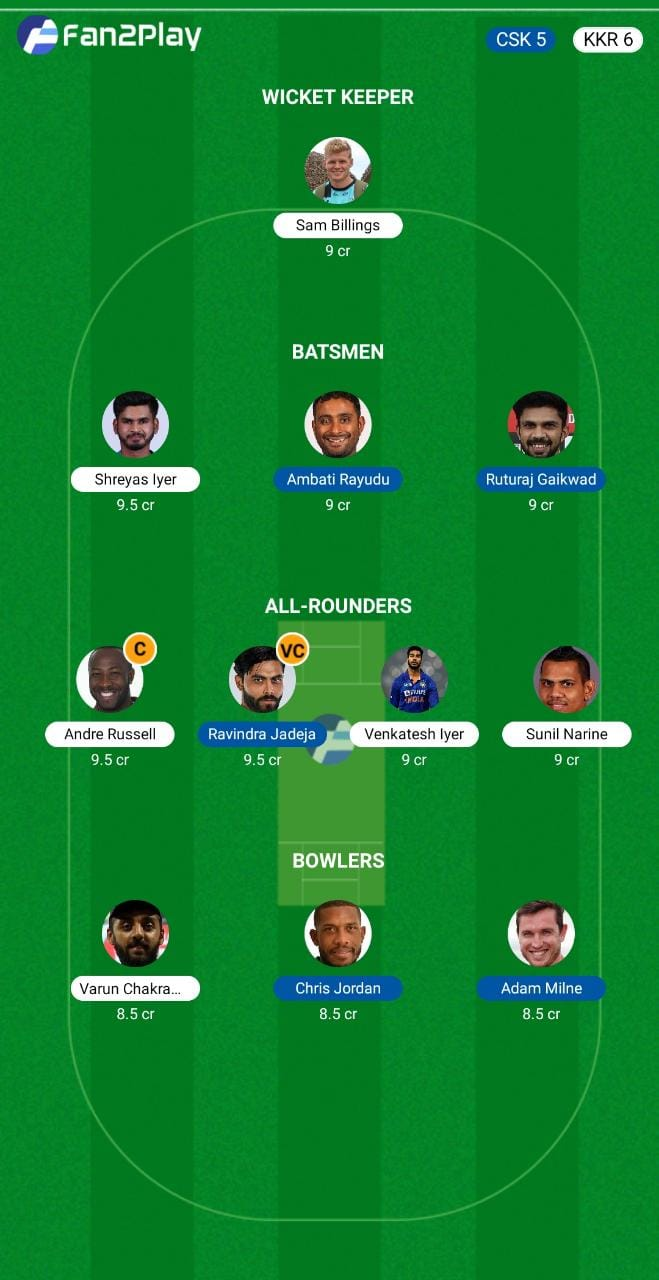