India will face Scotland in Match 37 of ICC T20 World Cup 2021 on 5 November at Dubai International Cricket Stadium. With a crushing 66-run win over Afghanistan on Wednesday, India got their campaign back on track. However, India’s work is far from done, as they are now ranked fourth in Group 2 points standings. Scotland, on the other hand, has already been eliminated from the tournament. The Scots are bottom of their group after losing all three of their games. New Zealand defeated them by 16 runs in their previous match.

1) Rishabh Pant – The left-handed batsman is a dynamic player from his squad. His excellent skills as a wicketkeeper are something that his team can benefit from.

1) Rohit Sharma – He has improved his game by being more technically sound, having a better awareness of his off-stump, a more compact approach, and a higher level of patience. His repertoire of hard-hitting shots in his arsenal will be vastly useful for his team.

2) Virat Kohli – When the circumstances call for it, he is known to be highly lethal with his agile footwork against the spinners. He is known as an aggressive batter who is always looking for runs, and he possesses a reasonably decent technique that allows him to judge the length of the ball earlier than most batsmen.

4) Lokesh Rahul – He is a dependable player, and his unwavering determination, compact, airtight technique, and persistent attention in the crease are all reasons to select him for the team.

1) Jasprit Bumrah – Bumrah is a right-arm fast bowler with an unusual sling-arm movement and natural pace, and his deliveries have a distinctive release point that makes it difficult for batsmen to pick him out.

2) Mohammad Shami – In his career, the right-arm fast bowler has provided regular yet lethal spells as India’s leading pacer. He’s also had a surprising amount of success with his batting.

3) Bradley Wheal – Wheal was born in Durban, South Africa, and is a right-handed batsman and right-arm pace bowler. In 2016, he made his Scotland debut at the age of 19, at which time he also played in eight more Championship matches and from the start of his career he has been a reliable player for his team.

4) Safyaan Sharif – Sharif is an English-born Scottish cricketer who debuted for Scotland in the Intercontinental Cup One-Day tournament against the Netherlands. In 2014, Sharif was instrumental in Scotland’s World Cup qualifying win. In the competition, he took 14 wickets, earning him a spot in the 15-man roster for the 2015 World Cup.

1) Ravindra Jadeja – The slow left-arm orthodox spinner and the left-handed batsman has good control over his deliveries and his spell has a lot of subtle variants. He is a wise pick for the upcoming match.

2) Michael Leask – Leask, a right-handed batsman famed for biffing long sixes, and a part-time off-break bowler, was born in Aberdeen. Before joining the senior team, Leask represented Scotland in the Under-13, 15, 17, and 19 levels. Leask’s off-spin has had some noteworthy moments, such as taking three wickets in Scotland’s World Cup acclimatisation tour victory over Tasmania in 2014. 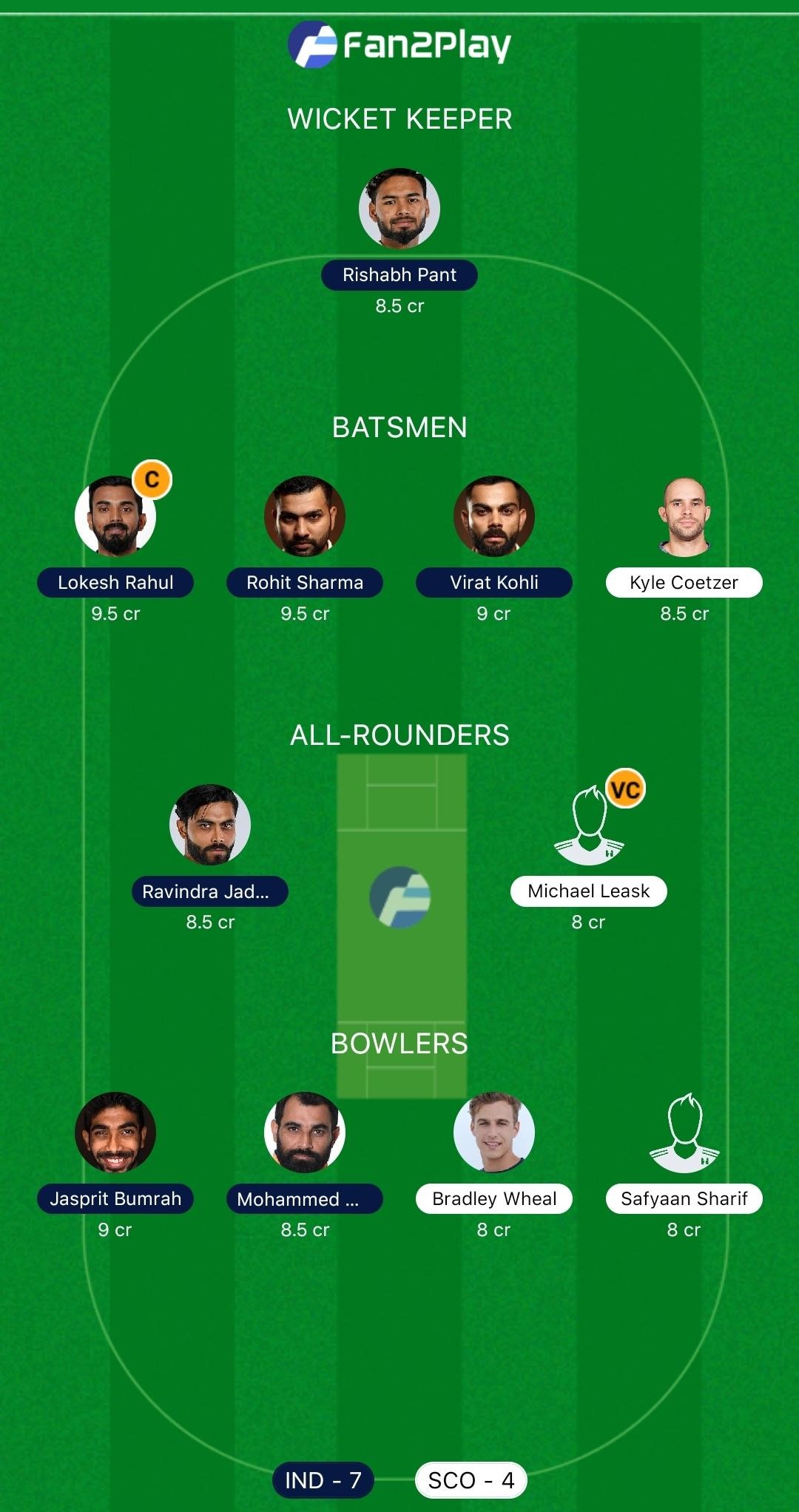