Ireland will lock horns with South Africa in the 3rd T20I match at Civil Service Cricket Club, Belfast on 24 July 2021. South Africa have won the 2nd T20I match and sealed the series as well. The competitive performances by David Miller and Tabraiz Shamsi, set the tone for the match. South Africa’s squad depth has proven to be incredibly strong in this series. Ireland need to work harder on their batting side to prevent a whitewash in the next match.

The pitch is favorable for bowling and is best suited for pacers. The weather would be partly sunny and very warm with temperatures at 26-27 ° C.

1) Quinton de Kock – The left-handed batsman’s fearless striking and handy glovework gave his team an advantage against Ireland. He took a wicket behind the stumps and scored 27 runs in the last match.

2) Lorcan Tucker – The right-handed wicketkeeper-batsman is a talented young player from Ireland who took a wicket behind the stumps in the last match.

1) Rassie van der Dussen – The middle order player is a naturally attacking batsman and is a talented player in this format. He has played decent innings in this series and has a lot of potential to play well in the upcoming matches.

2) Janneman Malan – The young right-handed batsman has played phenomenal innings in this series so far. He is playing in good form and his team might benefit from it in the next match.

3) David Miller – He is a hard-hitting left-hander with a penchant for clearing the boundaries with ease. He led his team to victory in the last match by hitting 75 hard runs.

4) Andy Balbirnie – The right-handed batsman’s game has improved immeasurably, as did his ability against spinners in the middle overs with his hard sweeps. He has potential to play good innings in the next match.

1) Lungi Ngidi – The right arm fast medium bowler is one of the best pacer from his squad. He has been a trustworthy player for his team and has given consistent performances so far. He took a wicket in the last match.

2) Joshua Little – He is a bustling left-arm seamer and a key performer for the Ireland squad. He has given good fantasy points and will be expected to continue such performance in the upcoming matches too. He took a wicket in the last match.

3) Kagiso Rabada – The right arm fast bowler is a strapping, genuine quick pacer who is one of the best attacking bowlers in this format, from his squad. He has consistently taken wickets from Ireland in this tour.

4) Tabraiz Shamsi – The left-arm wrist spin bowler with ample variations, took 3 wickets in the last match. He is playing in good form and will be a perfect choice for the next match.

1) Simi Singh – The right-handed batsman and right off break bowler took a wicket in the last match. He is in good form and is expected to play such innings in the next match too.

2) George Linde – The slow left arm orthodox bowler is a wrist spinner who was consistent in taking wickets in this tour. Such performance is expected from him in the next match as well.

3) Mark Adair – The right arm fast medium bowler is a seam-bowling allrounder who has delivered phenomenal spells in the last match and took 2 wickets. He is in great form and is a wise pick for the next match.

4) George Dockrell – The right-handed batsman and slow left arm orthodox bowler is a left-arm spinner of rare potential who can turn the match in his favour with his deadly bowling. He is playing in good form. 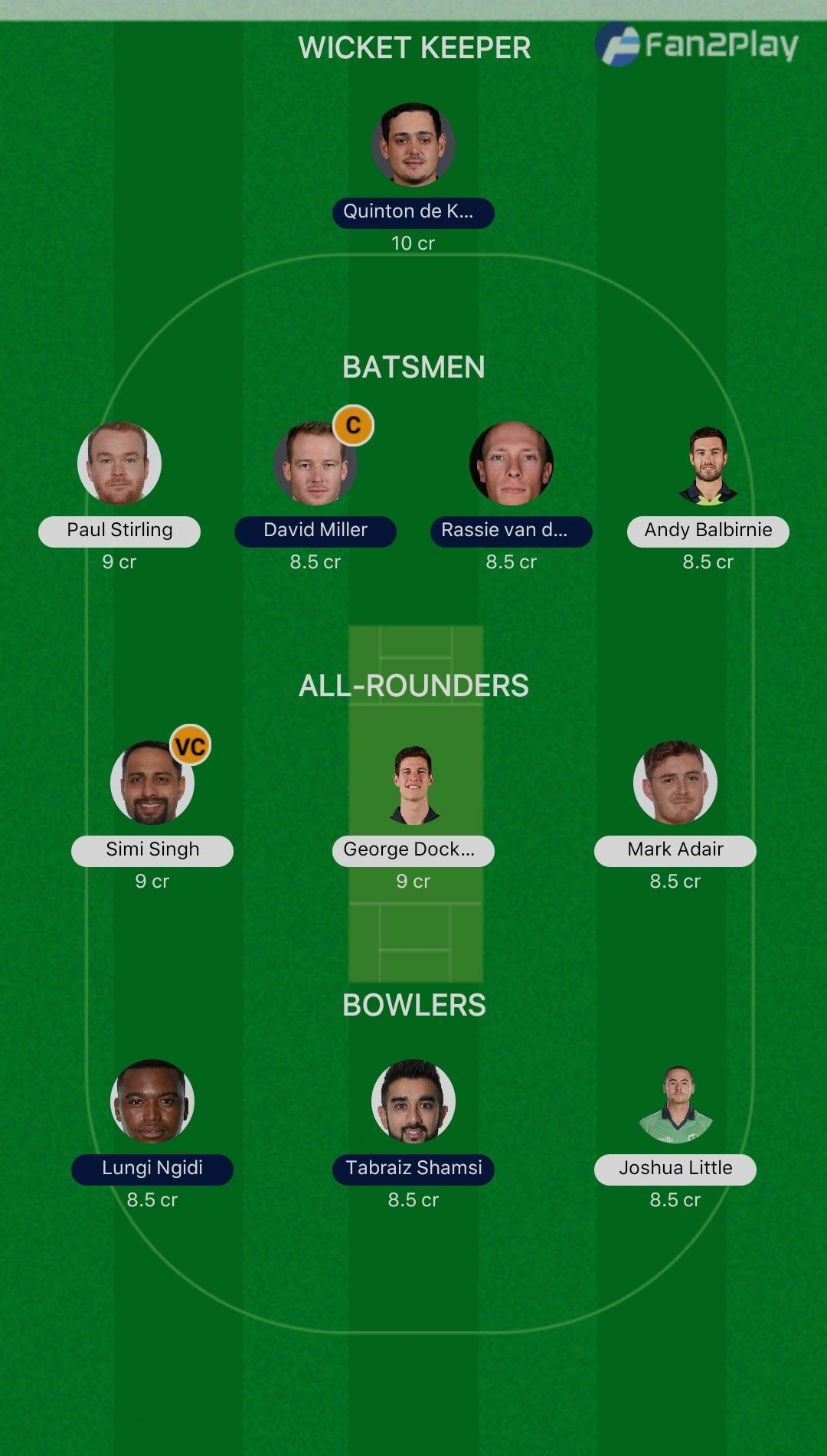