On Friday, the Kolkata Knight Riders and Punjab Kings (KKR v PBKS) will play in the eighth match of the IPL 2022 at Wankhede Stadium. Kolkata Knight Riders (KKR) were defeated by Royal Challengers Bangalore (RCB) by three wickets in their most recent encounter, despite the fact that the team was effective in keeping the match tight despite the low score, Punjab Kings began their season with a victory, and the squad will be looking for its bowlers to improve after losing by more than 200 runs in their first encounter. After completing the three-day quarantine, South African fast bowler Kagiso Rabada is scheduled to participate, bolstering Punjab’s assault.

The Wankhede pitch is overall balanced and is best suited for pacers than spinners. Average runs scored on this venue is 145 and have 60% chances of winning if batting first. Weather will be normal with clear sky and average temperature at 30.99°C.

1) Bhanuka Rajapaksa – He is a left hand wicket keeper batsman. He had proved his mettle for PBKS in the last match against RCB by scoring 43 and is in a  good form.

2) Sam Billings: He is a right hand wicket keeper batsman. He has been scoring some good runs for KKR in this IPL.

1). Shikhar Dhawan – He is a left handed batter and he will be opening for PBKS. He scored two half centuries in the recent ODI against South Africa and is in great form. He scored 43 in the last match against RCB.

2) Mayank Agarwal – He is a right hand batter and will be captaining PBKS. By scoring some precious runs against RCB, and considering his recent form in the India vs Sri Lanka Test, he can be in our fantasy 11.

3) Shreyas Iyer- He is a top order batter with a right hand bat style. He scored 20* against CSK in the last match and showed some marvelous batting in the recent match against Sri Lanka and scored 92 & 67 on Bengaluru ground in test format.

4) Ajinkya Rahane – The right hand top order  for KKR. His performance against CSK in the IPL 2022 debut match was impressive as he scored 44 runs. He can be proved to be a good pick for our fantasy team.

1) Arshdeep Singh – He is a left-arm medium fast bowler. He has shown an impressive bowling attack in the recent domestic cricket match against Tripura and Haryana. Though he performed averagely against RCB in his last match, he has the power to dismantle RCB’s batting order.

2) Rahul Chahar – His bowling style is Legbreak googly. His recent matches have been average but he performed well against RCB.

3) Umesh Yadav – The leading Indian bowler has a fast bowling style of right arm fast. He is known for his swings in both ways. His recent stats are good against CSK (2/20)  and RCB(2/16) and has been in good form in domestic cricket.

4) Tim Southee : He is a tight arm medium fast bowler. He thrashed RCB in his last match with his impressive bowling for 3/20. He must be in everybody’s fantasy team.

1) Andre Russell – Russell has a bowling style of Right arm fast and right hand hitter. He performed well against RCB and has marvelous performances such as 3/17 in BPL.

2) Sunil Narine – He is a left-handed all-rounder with a right-arm offbreak bowling style. His stats tell pretty much about how important he is for his team. Although in the recent matches, he has not taken much wicket but his economy is worth noticing 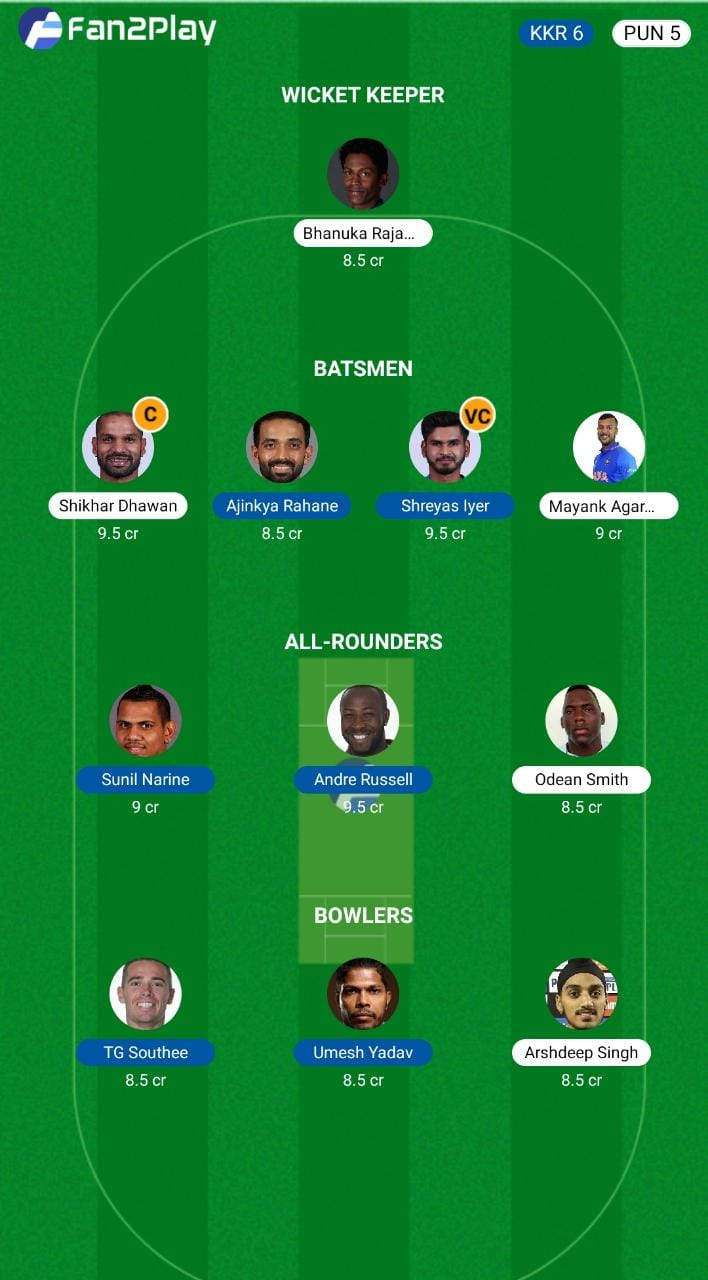