Kolkata Knight Riders will face Royal Challengers Bangalore in the 31st match of IPL 2021 on 20 September at Sheikh Zayed Stadium, Abu Dhabi. Before the league was postponed, the two teams had very different seasons, with RCB occupying one of the four playoff berths and KKR lingering towards the bottom. Kolkata Knight Riders, two-time champions, on the other hand, would hope that the restart will aid them in rediscovering their form and stringing together a decent run of performances, while Virat Kohli’s team will want to maintain their form.

1) Dinesh Karthik – The right-handed batsman has a penchant for sweep, reverse sweep that has helped his cause against spinners. He gave a decent performance in the first half of the IPL 2021.

1) Shubhman Gill – The right-handed batsman was drafted into the team due to his attacking techniques and his appetite for big runs. He is a wise pick for the next match.

2) Virat Kohli  – The right-handed batsman is an aggressive hard hitter  player who has shown that he can lead his team with an impressive growth in this IPL. He is in great form and can be trusted to give good fantasy points.

4) Devdutt Padikal – He is a young left handed batsman who is a vital component of RCB as he has played excellent innings for them in the past. He has slowly laddered up the ranks to establish himself as an exceptional batter.

1) Yuzvendra Chahal – The leg break googly bowler is an attacking spinner and leading wicket taker from his team. He is in good form and a wise pick for the next match.

2) Lockie Ferguson – The right arm fast bowler is quick with his good bouncer and his speed has made him a valuable player in his squad. He is considered as a major weapon in T20 and ODI format.

3) Mohammed Siraj – He rose as a seamer and with a remarkably swift bowling style. He has a deceptive run up that dazzles even the most experienced batsman and has bowled deadly spells for RCB in the past.

4) Prasidh Krishna – The right arm medium fast bowler started as a net bowler for RCB and took rapid strides to cement his place as a valuable player to the squad. He has given good fantasy points and bowled phenomenal spells in the 1st leg of IPL 2021.

1) Wanindu Hasaranga – The right-handed batsman and right-arm leg break bowler is a new addition to RCB and will be useful to the squad due to his strong skill set in this format.

2) Andre Russell – The right-handed batsman and right arm fast bowler is a hard hitter who played phenomenal innings in his recent CPL matches. He is coming off with a great form.

3) Sunil Narine – The left-handed batsman and right arm off break bowler is a valuable allrounder for KKR and a precise, experienced player in this format. He played excellent innings in the first half of the IPL and is still expected to retain the form in the second half too. 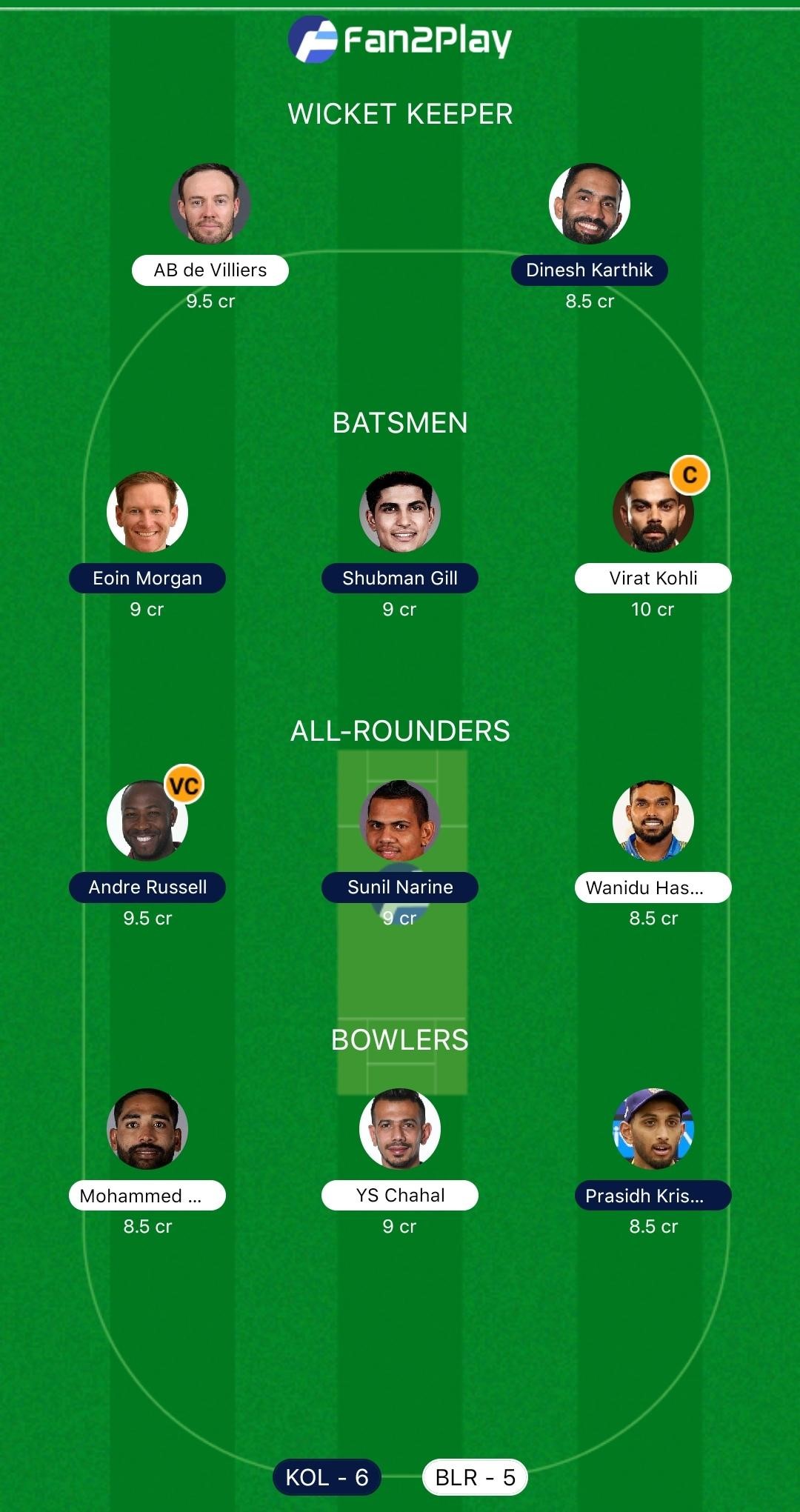