Sri Lanka will face South Africa in the 1st ODI match of a 3-Match series on 2nd September at R Premadasa Stadium, Colombo. This tour will be the Proteas’ final tour before the T20 World Cup in Oman and the United Arab Emirates. Sri Lanka, on the other hand, would be trying to repeat their success in this ODI series. Furthermore, it will be fascinating to see who gains an advantage in the first game.

The pitch is balanced and is more favorable to spinners. Minimal chances of light rain with temperatures at 27 – 28 °C

1) Kusal Perera- The left-handed batsman possesses short backlift, powerful forearms with good technique that has translated into impressive and consistent performances in his recent matches. He has a lot of potential to play well in this series.

2) Kyle Verreynne – The right-handed batsman is a talented player from his squad. He has been a part of the team due to his consistency with the runs for South Africa.

1) Reeza Hendricks – The right-handed batsman is a skilled batsman who will be a wise choice for the next match. He has a reputation as a destructive opener, adept at pacing a knock and scoring quickly at both the top and bottom of the innings.

2) Janneman Malan – The right-handed batsman is a remarkable player with an effective stroke play skills in this format. He displayed an explosive performance in the last ODI series against Ireland.

3) Charith Asalanka – The left-handed batsman is a talented middle-order player, he has played stable innings in this SLC T20 league and has a lot of potential to play well in this series also.

4) Avishka Fernando – The right-handed batsman is one of the most prolific players who has played impressive innings in the past few matches. He is an important pick in the team for the next match.

1) Tabraiz Shamsi – The left-arm wrist spin bowler with ample variations and a good googly has emerged as South Africa’s most valuable bowler.

2) Anrich Nortje – He is a right arm fast bowler who gave his finest deliveries in the last match against Ireland and is expected to follow suit in the upcoming match.

3) Dushmantha Chameera – The right-arm fast bowler has quick pace, generated from a slightly round-arm action. He is in good form and has consistently taken wickets against India in their last tour.

1) Wanindu Hasaranga – The middle order batsman, and an aggressive legbreak bowler is an asset for his team. He is in good form and will be a wise pick for the next match.

2) Dhananjaya de Silva – The right-handed batsman and right arm off break bowler played great innings in the ODI series against India and even in the SLC league.

3) Andile Phehlukwayo – The left-handed batsman and right arm medium fast bowler is a seam-bowling allrounder, who has proved to be an asset for his team on countless occasions. He is a must pick for the upcoming match. 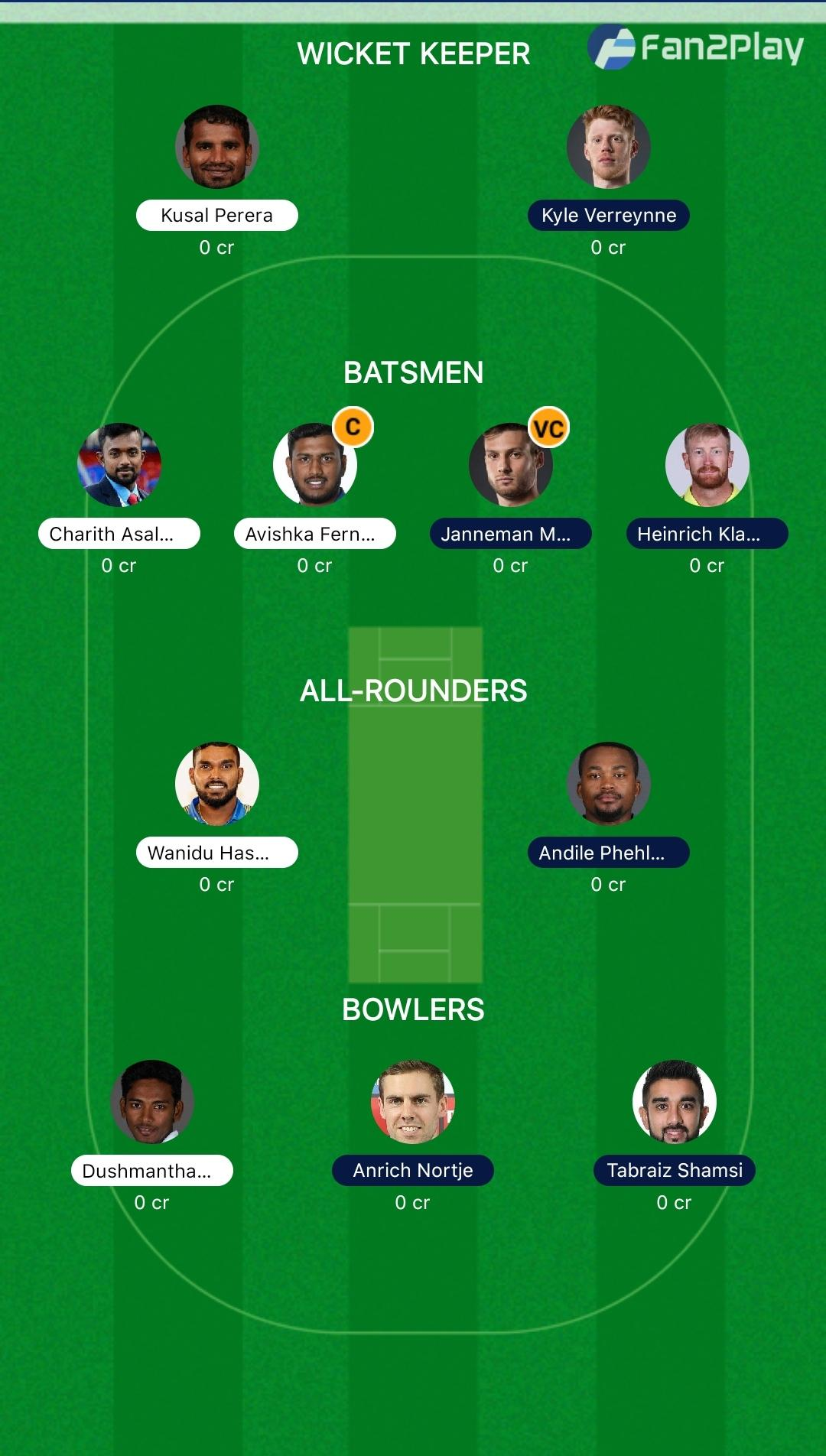