Sri Lanka will face South Africa in the final ODI match of a 3-Match series on 7 September at R Premadasa Stadium, Colombo. South Africa was behind 0-1 in the series after losing by 14 runs in the first game but produced a powerful performance in the second ODI to level the three-match series 1-1 by scoring 67 runs under the DLS technique. The series decider is set to be a thrilling match, with the series tied between the two teams.

The pitch is balanced and is more favorable to spinners. Minimal chances of light rain with temperatures at 27 – 28 °C.

1) Minod Bhanuka – The left-handed batsman displayed a good show of skills and grit in the last match. One cannot expect a better player than him in this category. He is playing a little slow lately but has a lot of potential in him.

1) Aiden Markum – The right-handed batsman is viewed as a batsman with class and calm, who was strong on the offside and aggressive in temperament, and who may modify a conservative South African approach to explosive batting. He made 21 runs in the last match and looks strong for the upcoming matches too.

3) Rassie van der Dussen – The right-handed batsman is a natural attacking player who has also excelled in long-format, scoring the most runs in South Africa’s domestic first-class cricket. He played excellent innings in the last match.

4) Avishka Fernando – The right-handed batsman is one of the most prolific players who has played phenomenal innings in the last match. He is an important pick in the team for the next match.

1) Tabraiz Shamsi – The left-arm wrist spin bowler with ample variations and a good googly, Tabraiz Shamsi has emerged as South Africa’s most valuable bowler. He took a fifer in the last match with his deadly spells.

2) Keshav Maharaj- He is a slow left arm orthodox bowler who is on a streak of taking wickets in this tour. He is a must pick for the next match.

3) Dushmantha Chameera – The right-arm fast bowler has quick pace, generated from a slightly round-arm action. He has rapidly established himself as a valuable bowler owing to his speed, which he achieves by using a slightly round-arm stroke that sacrifices mobility. He took 2 wickets in the last match.

4) Kagiso Rabada – The right-arm fast bowler is one of the talented bowlers from his squad who has rarely disappointed his team in any of the recent matches. He took 2 wickets in the last match and is yet to take many more in this series.

1) Wanindu Hasaranga – The middle order batsman, and an aggressive leg-break bowler is an asset for his team. He is in good form and will be a wise pick for the next match. He took a wicket in the last match.

2) Dhananjaya de Silva – The right-handed batsman and right arm off break bowler played great innings in the ODI series against India and even in the SLC league. He scored 13 runs and took a wicket in the last match.

3) Andile Phehlukwayo – The left-handed batsman and right arm medium fast bowler is a seam-bowling allrounder, who has proved to be an asset for his team on countless occasions. 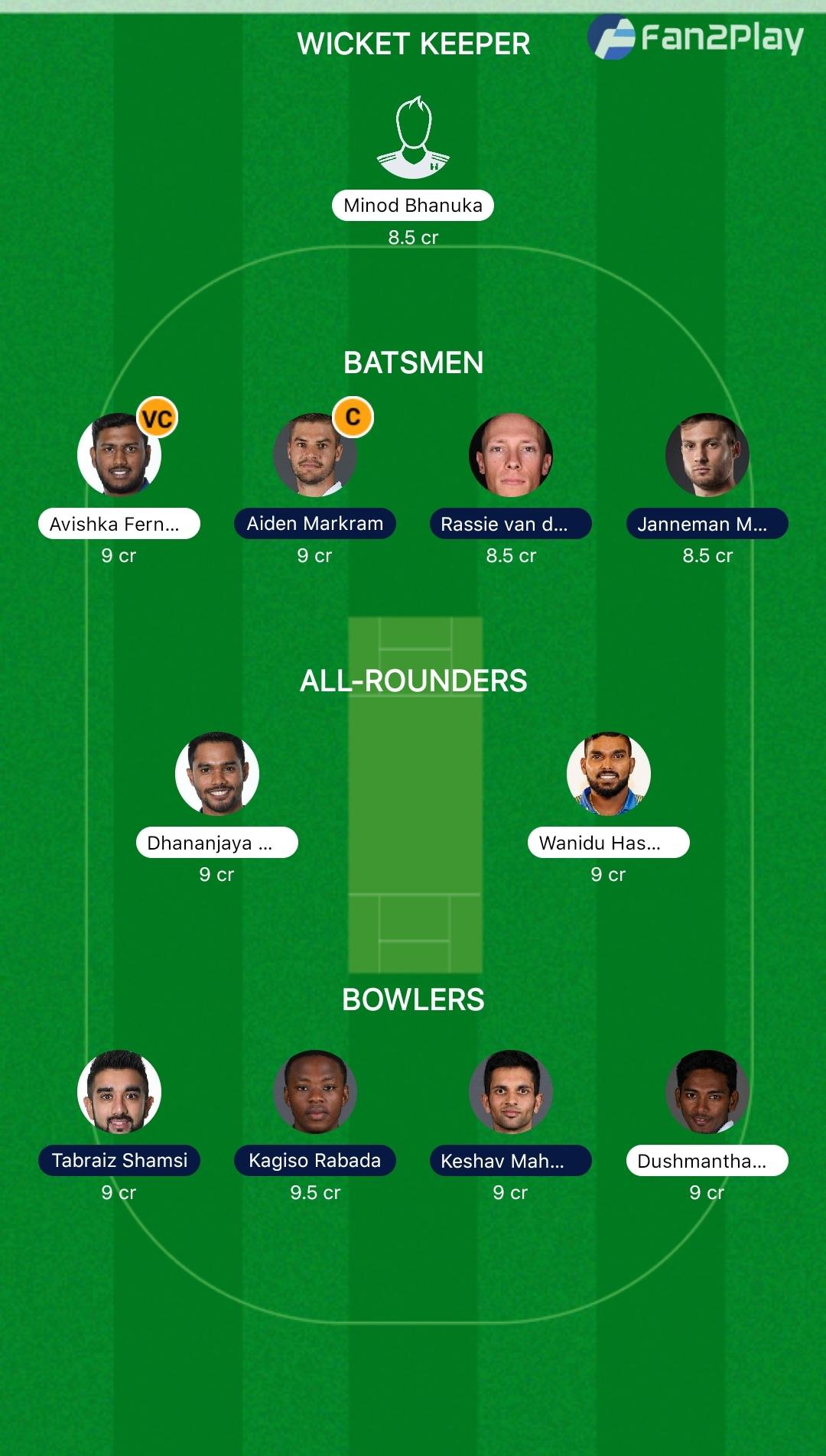